In collaboration with the Northern Institute of Applied Climate Science (NIACS), we developed a ‘menu’ of Adaptation Strategies and Approaches for managing fire under future climate conditions. This ‘Fire Menu’ is modeled after the original menu of Climate Adaptation Strategies and Approaches for Forests published by NIACS (Swanston et al. 2016). The menu is intended to be used as part of the Adaptation Workbook process developed by NIACS and available online through the Climate Change Response Framework. We continue the process of seeking feedback and improving this menu, and the current version is available in the expandable list below, as well as in a downloadable file in the sidebar.

Approach 1.2. Develop fire use strategies in altered or novel ecosystems where fire can play a beneficial role

Strategy 2: Reduce the effects of biotic and abiotic stressors on fire regimes

Approach 2.2. Maintain or improve the ability of forests to resist pests and pathogens

Approach 5.1 Promote diversity within and among communities

Approach 5.2 Maintain or increase structural diversity at the landscape scale

Approach 6.1. Use seeds, germplasm, and other genetic material from across a greater geographic range

Approach 7.2. Facilitate the movement of species that are expected to be adapted to future conditions and fire regimes

Strategy 8: Use fire events as opportunities for ecosystem realignment

Approach 8.2. Allow for areas of natural regeneration to test for future-adapted species

Approach 10.2. Actively promote broad social awareness and Increase education and about anticipated effects of climate change on local fire regimes at all scales 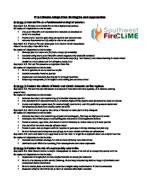 Adaptation Strategies for Climate & Fire in the Southwest (Presentation)